The legal responsibility of a Florida driver involved in an accident causing injuries or death is extremely straightforward as provided by Florida Statute 316.027 – Crash involving death or personal injuries:

Gabriel Amaya, a 17-year-old boy, who was riding his bicycle at the crosswalk of Powerline Road and Prospect Road in Oakland Park, was killed last week by a car that slammed into the teenager’s front tire. Gabriel was thrown off his bike and laid motionless on the asphalt. The driver of the car sped off, then stopped and exited his car, before walking right back into his vehicle and fled the scene for good.

Despite the best efforts of the medical team at Broward Health Medical Center, the young boy was pronounced dead later that day.

Broward Sherrif’s Office, investigating the crime, has limited information about the driver or vehicle involved in this incident. They are currently looking for a vehicle with damage to the left, front headlight, grill and side mirror. BSO is encouraging witnesses to come forward and contact the detectives with any information at 954-321-4845. 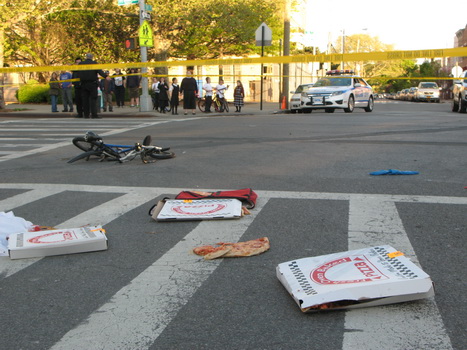 This latest tragedy is sadly all too familiar to Florida Injury Lawyer Blawg. According to the National Highway Traffic Safety Administration, 1 out of 10 car accidents is a hit-and-run. In a 10 year period, there have been 14,914 fatalities in hit-and-run accidents. Among those killed, 60% have been pedestrians, and 1 out of 5 pedestrian killed in a car accident is involved in a hit-and-run.

Why do drivers flee the scene of an accident:

According to different studies conducted by Fatality Analysis Reporting System, the American Automotive Asociation, and the General Estimated System databases, the top three reasons are alcohol, driver’s license, and insurance. In other words, drivers who should not be behind the wheel in the first place are mostly responsible for fleeing the scene of an accident they caused.

Why do Floridians need to pay attention to these accidents:

A recent study, conducted by Transportation for America, a non-profit organization, has compiled the Top 10 of worst cities for pedestrians and bicyclists in the United States. The results are damning for the State of Florida: The top 4 most dangerous cities are all from the Sunshine State: Orlando, Tampa area, Jacksonville, and Miami area. These four Florida cities are the most dangerous cities, which makes for the highest probability for a pedestrian and bicyclist to be involved in a hit-and-run accident in Florida than if they were crossing the street in any other state.

We will discuss in a future entry how Floridians should respond to these latest statistics and how they should prepare in the face of such a high rate of probability.