We previously reported it here, Leesfield Scolaro represents the families of two fatally injured victims who died when they were parasailing near Key West in July 2020. The captain was charged with manslaughter for conducting parasailing activities in winds too strong under Florida Law.  Early on in our investigation it became clear from the collected weather data and the testimony obtained later in the case that the operator should have cancelled all parasailing activities hours before the incident occurred.  All signs of inclement, dangerous weather and gusty winds were present.  The other two parasailing tour operators had cancelled their activities, but captain Andrew John Santeiro pushed through and exposed Nicholas Hayward, 36, and Azalea Silva, 29, to a grave peril.

The captain knew at the time that bad weather was coming for having observed a gathering storm on the other side of the island prior to embarking twelve passengers on his boat. Nonetheless, he disregarded the risk and pushed through. He also knew that the anemometer (instrument for measuring the speed of the wind) aboard the ship was broken and that he would have to rely solely on weather apps downloaded on his phone to obtain limited information. Not only does the phone fail to provide real-time reading, it also fails to provide accurate information relative to the precise location of the boat. To add insult to injury, captain Santeiro said he does not even remember checking the weather on his phone before the flight.

So he deployed the chute (wrong-size) with Nicholas and Azalea harnessed to it. Within seconds after sending them up, a gust of wind blew into the chute, almost capsizing the boat. In an instant, the towline broke, releasing the two passengers in flight to be dragged in the water by the inflated chute. At the same time, the towline snapped back into the boat’s propeller, leaving it dead in the water and unable to go rescue the couple stuck under water. Nicholas died at the scene, and Azalea died months later from her injuries.

Another update on litigation of this case will be provided in the future.

Fatal Parasailing Incident on Memorial Day in the Florida Keys
On May 30th, another senseless parasailing incident occurred in Marathon, Florida. According to reports, three parasailing passengers crashed into the Old Seven-Mile Bridge when their towline broke. A witness saw that the parasail “probably traveled a distance between one to two miles, heading for the bridge at a high rate of speed.”  The incident occurred at approximately 5:20pm.  The operator conducting the activity was Light House Parasail Inc., which runs operations out of Marathon, Florida as well as Corolla, NC.

Why were parasailing activities still being conducted at the time?

While the investigation is ongoing, several known facts are already extremely disturbing. In its latest bulletin, the National Weather Service Weather Forecast Office documented gusts of wind of at least 32 miles per hour and sustained wind speed of at least 23 miles per hour in the latter part of the afternoon, especially between 4:53pm and 5:53pm, around the time the passengers were sent up in the air at approximately 5:20pm.  Questions about possible negligent operation by the Captain of the boat or the first mate or the operations manager are to be investigated.  What equipment was on the boat or was available to the captain during the activity that would have alerted them to cancel the flight?  What was the length of the towline being used?  What size chute did the captain select given the number of passengers and the sustained winds? 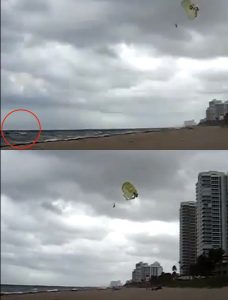 Florida law prohibits parasailing activities when winds reach a sustained wind speed of more than 20 miles per hour or if the wind speed during gusts exceeds more than 25 miles per hour.  On its website, the operator involved in this incident states “We hold a perfect safety record and are active USCG Master Captains using all safety equipment available in the industry for every flight”.  The advertised Florida Keys flight passes by the Sombrero Beach Lighthouse, and encourages customers to bring their camera to catch great views parasailing by the Seven Mile Bridge.

Florida law on parasailing activities was passed following another tragic incident litigated by Leesfield Scolaro.  In Pompano Beach, FL, two young sisters were sent up on a parasail in the middle of a brewing storm.  The boat captain disregarded the alerts and quickly found himself wrestling the winds and the waves who were pushing the boat ashore.  For several minutes the two teenagers harnessed to the chute were in the air, feet dangling above the beach, at the mercy of the elements.  Suddenly the towline snapped and the girls were catapulted against nearby buildings.  One of them died in the incident.  Leesfield Scolaro’s longstanding efforts in court and in the media were partly responsible for the passage of the very first set of regulations by the Florida legislator.  It was a great achievement when in 2014 the law came into effect but today’s latest tragedy is another indicator that the law does not go far enough.