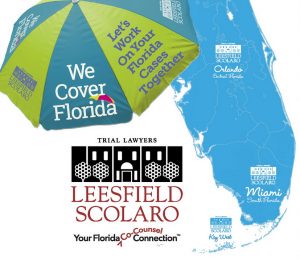 I. $25 Million lawsuit filed for murder in gated community

A gruesome murder in front of his family only matched by the sheer incompetence and greed of the company in charge of security at our client’s gated community. Despite the many requests for increased security and additional armed security officers, the defendant corporation opted to decrease security measures as the spike of violent crimes was nearing.

In charge of criminal background checks, comings and goings, and 24/7 patrols, the management company allowed a lifelong violent criminal to live in the complex without background checks and without authorization. This person racked up five felony convictions (and 10 felony charges), including weapons charges, strong-arm robbery, and cocaine trafficking, before moving into the complex. It was common knowledge that he lived there yet, security personnel ignored it. Ultimately what was avoidable became inevitable, and on the eve of Thanksgiving, after a long drive home to his family, our client was stabbed to death by this criminal.

Security was not at the scene in the hours after the incident. Security did not register one single patrol checkpoint that entire evening, and security’s first entry into the electronic security log came three hours after our client’s cold-blooded murder. He leaves behind a young wife and four young children who will grow up without their dad only because a corporation whose sole business is to provide security decided to save money instead of saving lives.

A very similar 2019 case filed in Orange County, Florida, resulted in a confidential seven-figure settlement. Our clients, two fathers retained our firm to represent them for the murder of their respective minor child (10 and 12).  In this case the murderer was allowed to live in an apartment of the complex without ever having to go through a background check. Had one been performed, the management company would have discovered a violent career criminal, with multiple arrests, convictions for violent crimes, including aggravated assault with a deadly weapon, domestic battery, a conviction for first-degree arson of a dwelling, fleeing and evading police, as well as numerous
others offenses.

The failure to conduct a criminal background check directly resulted in this dangerous individual residing in the apartment complex which ultimately resulted in the tragic killing and untimely death of two young and innocent children.

“There has never been a more savage hotel-based crime in Florida’s history,” said Managing Partner Ira Leesfield. “It’s a case that should remind businesses why it is crucial to provide security measures that are relative to the premises and its surrounding area,” according to Partner Justin Shapiro.

Dragging a 65-year-old hotel visitor by her hair, through the halls and into the elevator of the defendant’s hotel, and then a strangulation and rape but not before defendant bit a large chunk of flesh out of this grandmother’s forehead and forced her to perform oral sex. Out-of-state visitors are often targets of horrific crimes because the perpetrators do not believe the victims will return to testify at the criminal or civil trial.

There had been more than 1,200 calls for police response to the same hotel prior to this incident. All of these unspeakable and despicable acts were preventable had the hotel provided reasonable security consistent with the high crime condition of its location. Shockingly, hotel employees were present and very close by while this animalistic attack occurred. 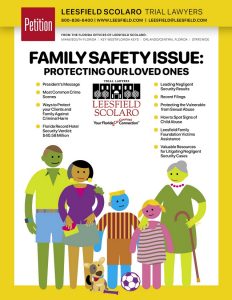 This issue of Petition is dedicated to family safety and negligent security. Our clients, families and friends need to know about these real, but under-reported phenomena, which impact everyone’s lives. Inside this issue you will find information on currently litigated negligent security cases that present important legal and common sense issues. There is no better time to share with others what we have learned from our 45-year statewide practice that has yielded over $250,000,000 in verdicts and settlements for crime victims.

In this latest issue you will also find practical and common sense tips that will help avoid otherwise dangerous situations and alert innocent victims of potential crime scenes. Simple measures of precaution are joined by greater awareness of prevention and lurking hazards.

As our firm moves into its 45th year of practice, we have seen a lot. We know about cycles, good times and bad for our clients. We are always here to help. We are always available 24/7. We will always expend our efforts on your client’s behalf. Time, assets, compassion and a highly trained senior staff confirm the best results and leading Florida verdicts.

Historically, and even more so now, our work with co-counsel and their clients is of higher importance. With an increase of unexpected damaging events, we have added more staff and resources to bring about comfort and repair for those with life-changing injuries and events.