This past weekend, a 3-year-old boy, Henrique Dias Amorim, was discovered “floating” by a family member after a family gathering organized at a waterfront home that family had borrowed for the occasion. Somehow, it is believed the child found his way out to the backyard and the pool during the gathering. The responding authorities have already declared that no charges would be brought against anyone in this case, and they qualified this to be a horrific accident. Early investigation has shown that the pool in question did not have a pool fence or barrier to prevent the child from going inside the pool. It is unclear as of yet whether the home should have been equipped with such protection.

Recently, Leesfield Scolaro filed a lawsuit in another tragic drowning case, to another little boy who was found in the pool by his grandfather, despite the pool being equipped with a pool fence. In their lawsuits, Ira Leesfield and Tom Scolaro have alleged that the pool fence manufacturer was liable and responsible for the incident due to numerous significant defects in the pool fence manufacturer’s product. Thankfully, the child survived, but not before he sustained catastrophic brain damage, for which he will require medical care the rest of his life.

The state of Florida has staggering statistics when it comes to fatalities of young children and pool drownings. According to Florida Health, Florida loses more children under age five to drowning than any other state. Annually in Florida, enough children to fill three to four preschool classrooms drown and do not live to see their fifth birthday.

END_OF_DOCUMENT_TOKEN_TO_BE_REPLACED 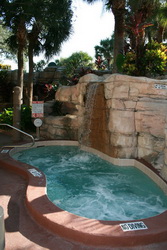 As a result of the Hotel’s negligence, Aljuwon sustained brain damage requiring life-long medical care. On August 25th, 2011, the Orlando Personal Injury Attorneys at Leesfield Scolaro, Ira Leesfield and Carol Finklehoffe, on behalf of Aljuwon Pipkin and his mother, who witnessed the near drowning incident, settled this brain damage claim for a confidential amount with the Hotel Resort Defendant. It is the largest result in a pool entrapment case in Osceola County.
END_OF_DOCUMENT_TOKEN_TO_BE_REPLACED