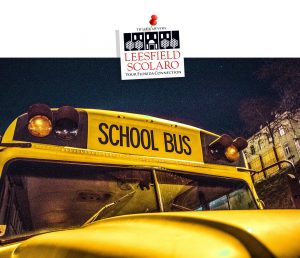 The at-fault motorist had limited coverage which was tendered immediately. Through litigation, Attorney Justin Shapiro determined that the bus driver was also at fault. Not only had she breached several school bus operating procedures, but also violated specific Florida laws.

Every school bus shall stop as far to the right of the street as possible and shall display warning lights and stop signals as required by rules of the State Board of Education before discharging or loading passengers. When possible, a school bus shall not stop where the visibility is obscured for a distance of 200 feet either way from the bus.

Through his own investigation and testimonial evidence, Justin Shapiro established that the bus driver was in the incorrect lane when she initiated the flashing lights and signaled for children to cross the street without waiting for traffic in front of her to clear. The driver violated Florida Statute §316.172(3), by failing to ensure 200 feet of visibility in the direction of oncoming traffic. She also violated Florida Statute §316.172(3), by stopping in the middle lane rather than stopping as far to the right of the street as possible.

45-year history of fighting for injured and abused children

Over the last decade alone, Leesfield Scolaro has handled all types of liability cases on behalf of families and minor children, from soft-tissue injuries to wrongful death cases.

Partner Thomas Scolaro has represented multiple families for the wrongful death of their baby/toddler at a child care center. In Florida, there are almost 3,000 family home daycare providers which are not required to obtain liability insurance under Florida Law. In multiple cases Leesfield Scolaro has had to creatively find coverage, which is an impossible task for many other firms, especially because Florida Statutes 627.70161 provides that “a residential property insurance policy shall not provide coverage for liability for claims arising out of, or in connection with, the operation of a family day care home…”

Attorneys Adam Rose and Carlos Macias have obtained significant settlements in surgical and non-surgical cases against schools for the negligent maintenance of school grounds and also for the school’s failure to supervise children. In difficult cases with catastrophic injuries, we must seek compensation from parents whose child engaged in horseplay and injured another child.

In the recent past, Leesfield Scolaro has litigated against counselors, scoutmasters, summer camps, the Boy Scouts of America, or the Archdiocese of Miami to name a few, for the sexual abuse inflicted upon young children. The tradition of fighting for the most vulnerable among us has been the spine of our firm, a tradition of bringing civil justice on behalf of emotionally, sexually and physically abused children that begun in 1976 by Founder and Managing Partner Ira H. Leesfield.