On Saturday night, a two boats were involved in an accident off Biscayne Bay, one mile off Matheson Hammock in Coral Gables, Florida. The Florida Fish and Wildlife Conservation Commission which is investigating every single boating accident in the region has relayed minimal information through its spokesperson, Jorge Pino. What the public knows thus far is that a 68-foot motor yacht traveling north along the coast collided with a 27-foot pleasure boat that was navigating south along the coast. 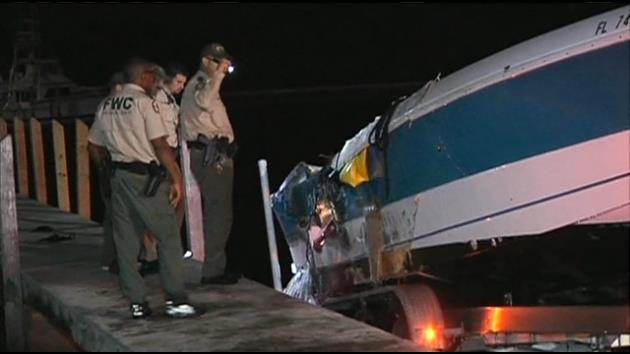 Three occupants of the smaller boat fell into the water and were injured in the accident. All three were pulled onto the yacht by some of the 21 passengers on board. Among the three injured people, Maria Del Valle, 29, was critically injured. She was initially taken to Mercy Hospital for treatment before being transported to Jackson Memorial Hospital, where she tragically died.

Maria Del Valle was the mother of four children, with the youngest child being just 14-months-old, according to the FWC. The father of her youngest child, Maykel Perdomo, 33, is among the injured people who were on the small boat and thrown into the water. He is said to be in stable condition at this time. The third person involved is Dayron Baralt, 23, who was still in critical condition yesterday. His status remains unknown at this time.

Immediately after the collision, flares were shot into the air and alerted the many officers patrolling the Biscayne Bay area during Columbus day weekend, which is known for a popular boating day in South Florida. The FWC investigators towed the small vessel to Matheson Hammock marina, while the large yacht was anchored at the scene of the accident and is considered a crime scene. Local police enforcement agencies helped in the screening of the passengers who were on the yacht at the time.

The operator of the yacht, was escorted in by FWC investigators to conduct a sobriety test and draw blood. FWC said they will not know the results of the toxicology report for approximately two weeks (it will probably only take 2-3 days for the investigating officers to obtain the results) and see whether alcohol played a role in the accident. The father of Maria Del Valle, Lazaro Del Valle, told reporters during an interview shortly after the incident that his three grandchildren “found out through Facebook they have no mother.”

Whether alcohol played a role in the tragedy, investigators seem to believe the operator of the yacht was negligent and responsible for causing the collision. The next step will consist of gathering information relative the accident itself, such as the speed of each vessel and whether the yacht operator was negligent. If the FWC finds that he was negligent, he may be charged criminally for causing the death of Maria Del Valle and the other two injured people on the small vessel.

Leesfield Scolaro has represented many victims who were involved in boating accidents across the state of Florida, especially in Miami, Key West, and throughout the Florida Keys. While each boating accident has its own set of circumstances, breach in safety and negligent acts are always present whether alcohol was a factor or not.

Should you have information about the incident that occurred Saturday night, contact the FWC immediately or your local authorities in helping them to determine the circumstances of this collision.